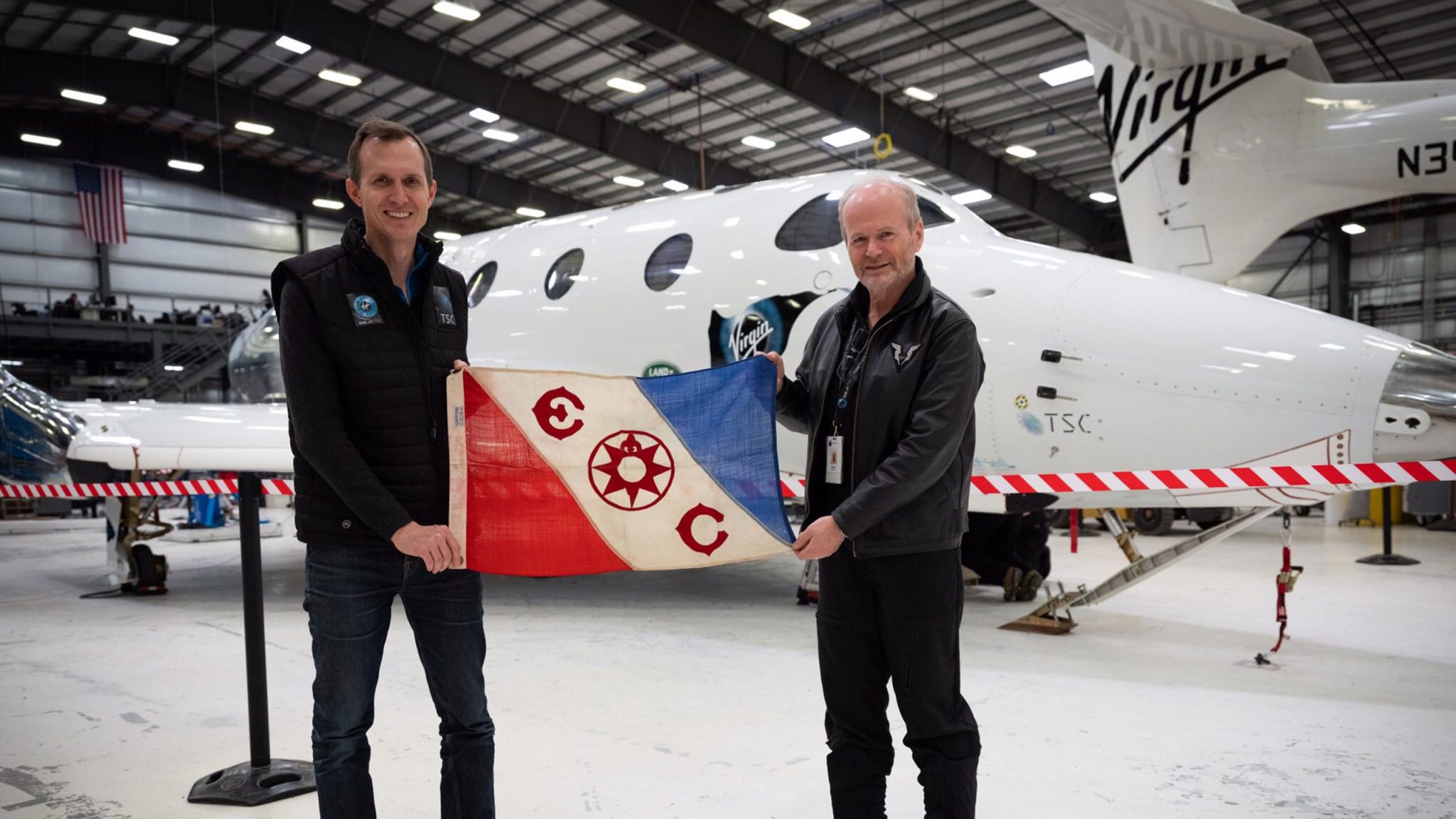 Our Chief Pilot, Dave Mackay, talks about meeting the Apollo 11 crew and returning a very unique piece of space cargo.

I was privileged to be on the flight deck of SpaceShipTwo, VSS Unity, as we soared into space for our latest test flight, alongside co-pilot, Mike “Sooch” Massuci. In the cabin behind us, our third crew member, Beth Moses accompanied scientific payloads that we were flying for the NASA Flight Opportunities program. We also carried with us another very special piece of cargo; an item that was flown on the world’s first solar powered round the world flight, and aboard a world record breaking balloon flight – the famous Explorers Club flag.

The Explorers Club was founded in New York in 1904 as a not for profit organization dedicated to scientific exploration of the oceans, land, air and space. For over 100 years, the club’s flag has been carried by some of the world’s greatest explorers on their amazing adventures and has helped to celebrate their wonderful achievements. So it was an incredible privilege to have that very same flag carried onboard Unity as our spaceship’s rocket motor ignited and sent us rocketing towards space at three times the speed of sound.

As we coasted through the Earth’s upper atmosphere and into the black sky of space, marveling at the serenity and jaw dropping views of our planet, it also meant that we were adding another inspiring chapter to the story represented by the flag.

On Saturday, I was invited to tell the tale of this flight, and the years of meticulous planning and hard work our teams completed to make it a reality, to a room of astronauts, aquanauts and other likeminded adventurers who’ve seen more of the world – and universe – than anyone would believe possible. It was The Explorers Club 115TH annual dinner and a celebration of the first humans to set foot on the moon – the Apollo 11 crew. In attendance were 10 Apollo astronauts, all of who played a vital role in the success of that incredible mission, including the second man to walk on the moon, Buzz Aldrin.

The images of Buzz and Neil Armstrong walking on the surface of the moon was what kickstarted my own passion for space and I know it had the same impact on Richard Branson, eventually leading him to launch Virgin Galactic.

It was an honor to spend time with these pioneers of space exploration, whose achievements have inspired millions around the world. Hearing their stories first-hand was a truly exceptional experience; I was as mesmerized by their tales on the night, as I was as a wee boy in front of the TV, at home in Scotland in 1969, watching live as two incredible explorers set foot on a new world.

This summer marks 50 years since that Apollo 11 mission. Until December last year, only 567 people had ever been to space. Since then, Virgin Galactic has created five new Commercial Astronauts and completed two crewed spaceflights – the first from U.S soil since the last space shuttle mission in 2011.

It was an honor to join the Apollo astronauts and speak of how their journeys still inspire us as we push on to our goal of creating the world’s first commercial spaceline.