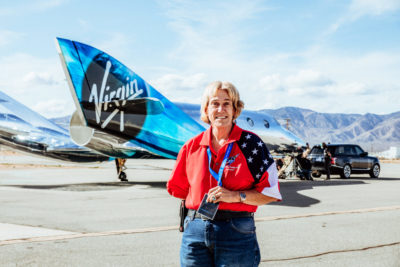 What do you use to tow a vehicle that can travel three times faster than the speed of sound into space and then glide gracefully back down to Earth?

Retired science teacher, Dee, has been passionate about space ever since she saw Alan Shepard fly into space in 1961. She applied to become an Astronaut with NASA twice during her career and has a space collection of over 12,000 pieces – including a tire from the Space Shuttle.

As soon as she heard about Virgin Galactic she knew she wanted to become a Future Astronaut and joined the 600 strong community of people signed up to fly into space.

In this blog, she describes what it was like to be one of the first people in the world to see SpaceShip III Imagine in all its glory.

What was your reaction when you saw SpaceShip III Imagine for the first time?

The whole experience was absolutely spectacular and brought me to tears.

I wasn’t prepared for the chrome coloring and the blue graphics. I walked into the FAITH hangar, and as I turned the corner, I caught a glimpse of the spaceship’s nose. It stopped me in my tracks, and I said – “it’s chrome!”

Then, I had a very emotional moment. She’s just beautiful, and the graphics shine so brightly off the booms. It wouldn’t surprise me if people on the flight line can see this spaceship even when it’s space.

What do you think of the name, SpaceShip III Imagine?

I think it fits perfectly. If you can imagine it, then you can dream it, and then, hopefully, you find a way to turn that dream into a reality. I’m a huge believer that what makes life special is enjoying the imagination of your dreams coming true.

That matches perfectly with my Virgin Galactic journey right now, especially with all of the incredible experiences I’ve had as a member of the Future Astronaut community.

SpaceShip III Imagine is a wonderfully positive name that makes me excited for the future.

How does it feel knowing your Range Rover has towed SpaceShip III Imagine, a vehicle which will one day be taking people on a lifechanging trip to space?

It’s surreal, and the whole thing was a total honor. I felt like a proud parent watching my Astronaut Edition tow the future of the Virgin Galactic fleet out of the hangar. All of the images from the day will be framed and hanging on the wall of fame in my house, that’s for sure!

Why did you want an Astronaut Edition Range Rover?

It’s so unique. You can only have one if you belong to this very special club of Virgin Galactic Future Astronauts. It’s funny, when I arrived at the FAITH hanger, I got out of the car and a bunch of the Virgin Galactic engineers came running over to me shouting, “can we see the car?” I was like, “sure, but I want to see the spaceship!”

My favorite features on the Range Rover are the puddle lamps -  when you open the car door at night, a graphic of SpaceShipTwo is beamed onto the pavement.

Another feature I love is that the team have taken part of the front landing skid from VSS Unity’s first spaceflight, and repurposed it to form two discs within the cup holders. One of these references a quote from Richard ‘See you up there’ -and the other features the details of the space flight. The second one will be swapped out once I’ve flown with the skid from my own spaceflight and engraved with the key stats. How cool is that!

The color is gorgeous too, and unique to the Astronaut Edition. It was designed to mirror the depth and intensity of the night sky and it’s a stunning rich blue.

What’s it like being a member of the Future Astronaut Community?

You get to meet wonderful people. Not just other Future Astronauts, but the people behind the Company that are on a mission to make our dreams come true -  the engineers and space wrenches who are building spaceships.

On the day of the SpaceShip III shoot, I was in the break room and Jameel Janjua, one of the Virgin Galactic Pilots, was there. He came over and he told me about what it’s like to be preparing to fly these incredible spaceships.

I’ve never met a grumpy Virgin Galactic employee – they are all wonderful people.

That’s like asking who your favorite child is! Watching the second spaceflight from the flight line in Mojave was special, but of course, getting a behind the scenes look at SpaceShip III and the unveil of the spacesuits stand out for me too.

What part of your spaceflight are you most looking forward to?

I will cram so much into the time I have in space. I want to put my nose print on every window and take in the beauty of looking at Earth with no borders – I want to be a big sponge and suck it all in.

I’d also like to take a moment to say thank you to everyone at Virgin Galactic for building another gorgeous spaceship, and for making my dreams come true.