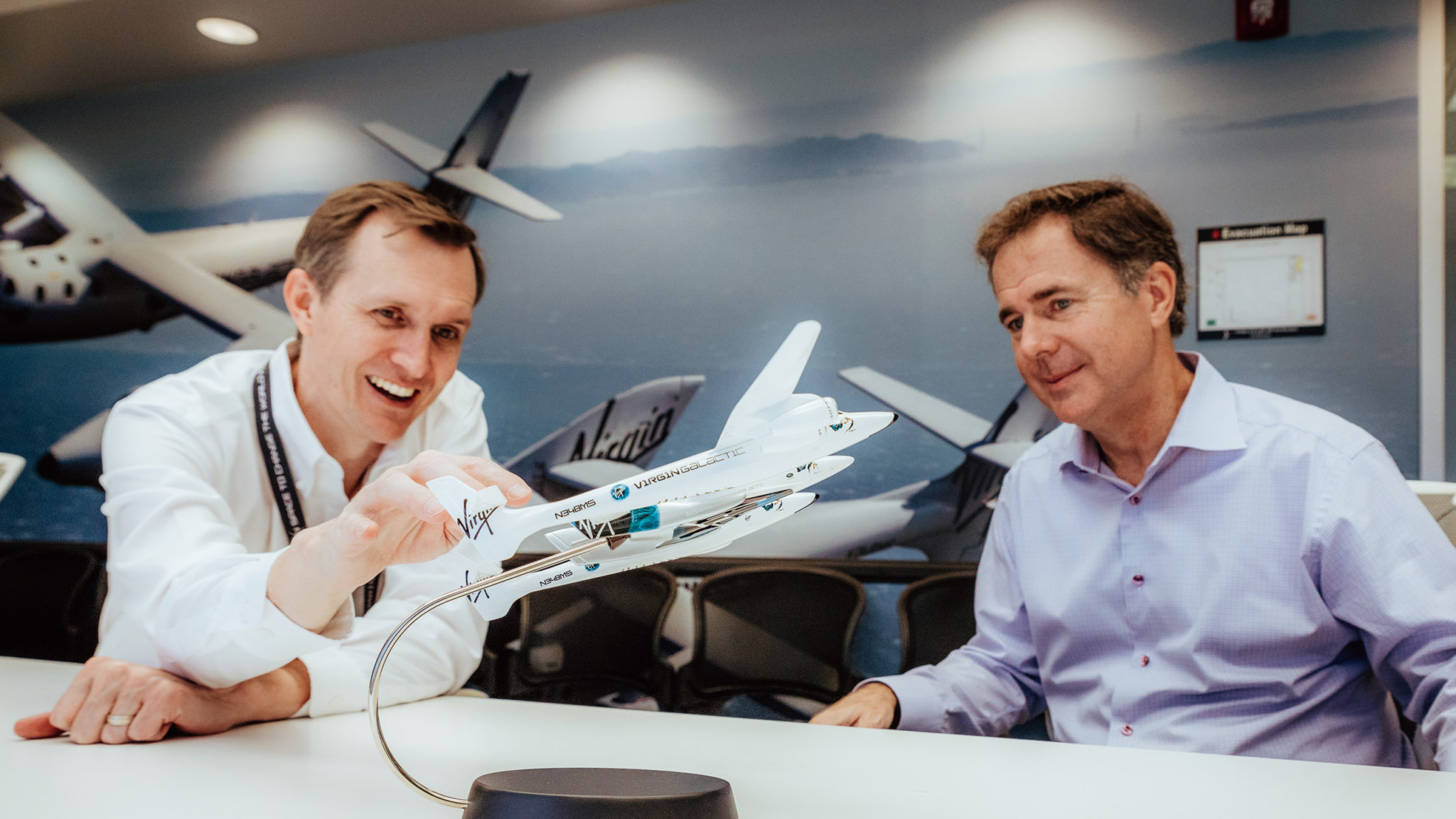 Michael assumes the CEO role at an exciting time for Virgin Galactic as the Company progresses through its test flight program and prepares for commercial service.  He will also join the Company’s Board of Directors effective July 20, 2020.  Michael joins Virgin Galactic following a long and successful career at The Walt Disney Company (NYSE: DIS), bringing over three decades of experience in developing and growing consumer-oriented multi-billion dollar businesses strategically, commercially, and operationally. Most recently Michael was President and Managing Director, Disney Parks International, where he was responsible for operations, strategy, and commercial and experiential development of Disney’s international parks and resorts.

George will assume the role of Chief Space Officer, focused on developing the Company’s future business opportunities, including point-to-point hypersonic travel and orbital space travel. George will also chair the Company’s Space Advisory Board, and in conjunction with his new role will step down from the Company’s Board of Directors.  George joined Virgin Galactic in 2010 as its first CEO, after serving as Chief of Staff at NASA. During the past decade, he has built the Company from 30 people to a workforce of over 900 today, and he has successfully guided Virgin Galactic through its human space flight research and development program as well as the progress to date in its flight test program, culminating in two successful space flights.  These historic flights saw the first humans launched into space from US soil since the retirement of the Space Shuttle, as well as the first woman to fly on a commercial space vehicle. During the last year, George led the transition of operations from Mojave, California to Spaceport America, New Mexico, and oversaw the Company’s successful public listing —creating the world’s first publicly traded human spaceflight venture.Michael Colglazier said, “I am thrilled to join the talented team at Virgin Galactic at this inflection point in the Company’s journey.  Like so many others, including hundreds of signed-up customers, I have been inspired by this purpose-driven, world-class brand and the incredible opportunity it offers to open space to change the world for good. George’s vision and outstanding leadership have enabled Virgin Galactic to reach this point, and I am excited to work with him in his role as Chief Space Officer where he will spearhead our future development efforts.  On a personal note, I’d like to thank my friends and colleagues at Disney, especially Bob Chapek for his mentorship and guidance over the years, and Josh D’Amaro, who is bringing superb leadership to Disney’s Parks, Experiences, and Products.  I am grateful to the Virgin Galactic Board, our chair Chamath Palihapitiya, and our founder Richard Branson for their support and trust as we make history together in this amazing company.”

George Whitesides added, ‘’Serving as the first CEO of Virgin Galactic and The Spaceship Company for the past ten years has been the honor and adventure of a lifetime. The next decade for Virgin Galactic will be commercially-focused, and it is the perfect moment for us to bring a visionary commercial leader like Michael to take the Company forward. Michael brings enormous experience in building customer experiences for Disney all around the world, and scaling businesses into multi-billion dollar organizations. I look forward to supporting Michael as the Company realizes Richard Branson’s vision to share the experience of spaceflight with people around the world, now turning my focus to building the next generation of aerospace vehicles and experiences.”Sir Richard Branson said, “I want to thank George for his outstanding leadership of Virgin Galactic over the last decade. He has shown dedication and determination as its first CEO to build the Company from early stage development through to space flight, the first from American soil since the retirement of the Space Shuttle. In the past year, George has taken the Company public and moved it to Spaceport America. He transitions into his new role as Chief Space Officer having created substantial value as CEO and with Galactic poised for an exciting next chapter.”“At the same time, we are delighted to welcome Michael as the new Chief Executive to lead Galactic into commercial operations. I believe Michael’s long and distinguished career at one of the world’s leading customer experience brands provides a natural fit with Virgin’s culture as well as Galactic’s requirements as it prepares for commercial service.”Chamath Palihapitiya, Chairman of Virgin Galactic, said, “Michael’s skillset is highly complementary to that of the incredible team that we have at Virgin Galactic. He has considerable commercial and managerial experience and a proven track record of successfully commercializing new and innovative products and services all over the world. He will create an amazing customer experience for our Future Astronauts as we ramp up for spaceflight operations.”

Virgin Galactic is a vertically-integrated aerospace and space travel company, pioneering human spaceflight for private individuals and researchers, as well as a manufacturer of advanced air and space vehicles. Using its proprietary and reusable technologies and supported by a distinctive, Virgin-branded customer experience, it is developing a spaceflight system designed to offer customers a unique, multi-day, transformative experience. This culminates in a spaceflight that includes views of Earth from space and several minutes of weightlessness that will launch from Spaceport America, New Mexico. Virgin Galactic and The Spaceship Company believe that one of the most exciting and significant opportunities of our time lies in the commercial exploration of space and the development of technology that will change the way we travel across the globe in the future. Together we are opening access to space to change the world for good.