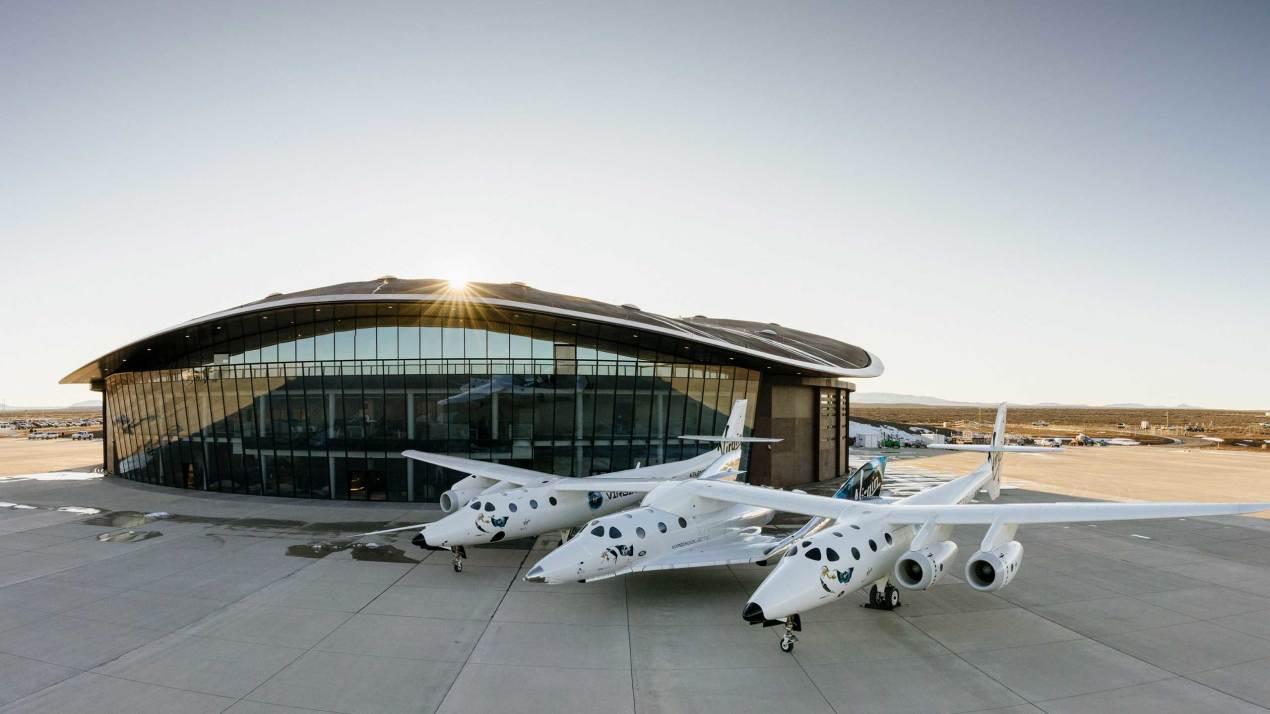 We are currently preparing for the first spaceflight from our operational base at Spaceport America in New Mexico, which will occur later this fall.  The flight will be crewed by two of our pilots and will carry several research payloads in the cabin of VSS Unity.

In these final preparations we are working through a number of rigorous steps to prepare the vehicles, pilots, teams and facilities, ensuring that we remain focused on safety as our top priority.

One of the steps along the path to be ready for a spaceflight is to ensure that our pilots are well prepared for the flight test objectives that they are about to conduct.  A significant amount of training occurs in our ground-based simulator, both with the pilots on their own, as well as in sessions that are linked to the mission control room.  We also have another powerful training tool for the pilots – our mothership vehicle, VMS Eve. Our Chief Pilot, Dave Mackay explains:

“VMS Eve has the ability to test pilot proficiency by simulating the glide and approach-to-land phase of flight for SpaceShipTwo pilots.  The cockpit structure of Eve is almost identical to that of Unity: the same pilot seats and windows, as well as very similar flight controls and instruments.  This, coupled with the fact that with Eve’s landing gear down, and one set of speed brakes out, it descends on the same flight path angle as SpaceShipTwo,  means that the crew can practice the identical approach and landing pattern to the one they will fly in Unity – with much of the same information displays, and the same view out the window.  This makes Eve a very valuable in-flight simulator for the spaceship’s final approach and landing phases.’’

Preparing VSS Unity for flight also includes a “practice run” for the spaceship, as well as the pilots and teams in mission control.  We put Unity through its paces on the ground, testing all systems prior to flight to ensure functionality – including raising the feather, swinging the landing gear, firing the reaction control thrusters, and sweeping the flight control systems through full range of motion.  Pre-flight vehicle checks are designed to functionally verify that all systems are working as they should be, prior to the take-off.

With this flight being our first spaceflight from our home at Spaceport America, we have planned a full rehearsal of our spaceship propellant loading procedures.  During this rehearsal, we will perform a full tanking test, loading high-pressure helium and nitrous oxide into their respective spaceship tanks on-board VSS Unity.  This rehearsal will give the teams the opportunity to review the end to end execution of every step in the flight process at Spaceport.

We are excited to announce that this upcoming spaceflight will be carrying research payloads in the cabin, as we have done on our previous spaceflights.  For this flight, we have three payloads that are part of the NASA Flight Opportunities Program

Consistent with how we conducted VSS Unity glide flights earlier this year at Spaceport America, all operations are following a set of stringent operational protocols that include changes to the work areas and procedures to enforce social distancing and universal mask usage, as advised by state guidelines.

We expect our first spaceflight from Spaceport America to occur later this fall and we are pleased to confirm that we are still on track to meet this timeframe.   In September we disclosed, via our application for a multi-year Federal Communications Commission (FCC) license, that October 22, 2020 would be the opening of our flight planning window.  We also included preliminary test flight dates for our mothership, VMS Eve.  Although preparations are going well, we are not quite at the stage where we can confirm specific planned flight dates for either our VSS Unity or VMS Eve test flights.