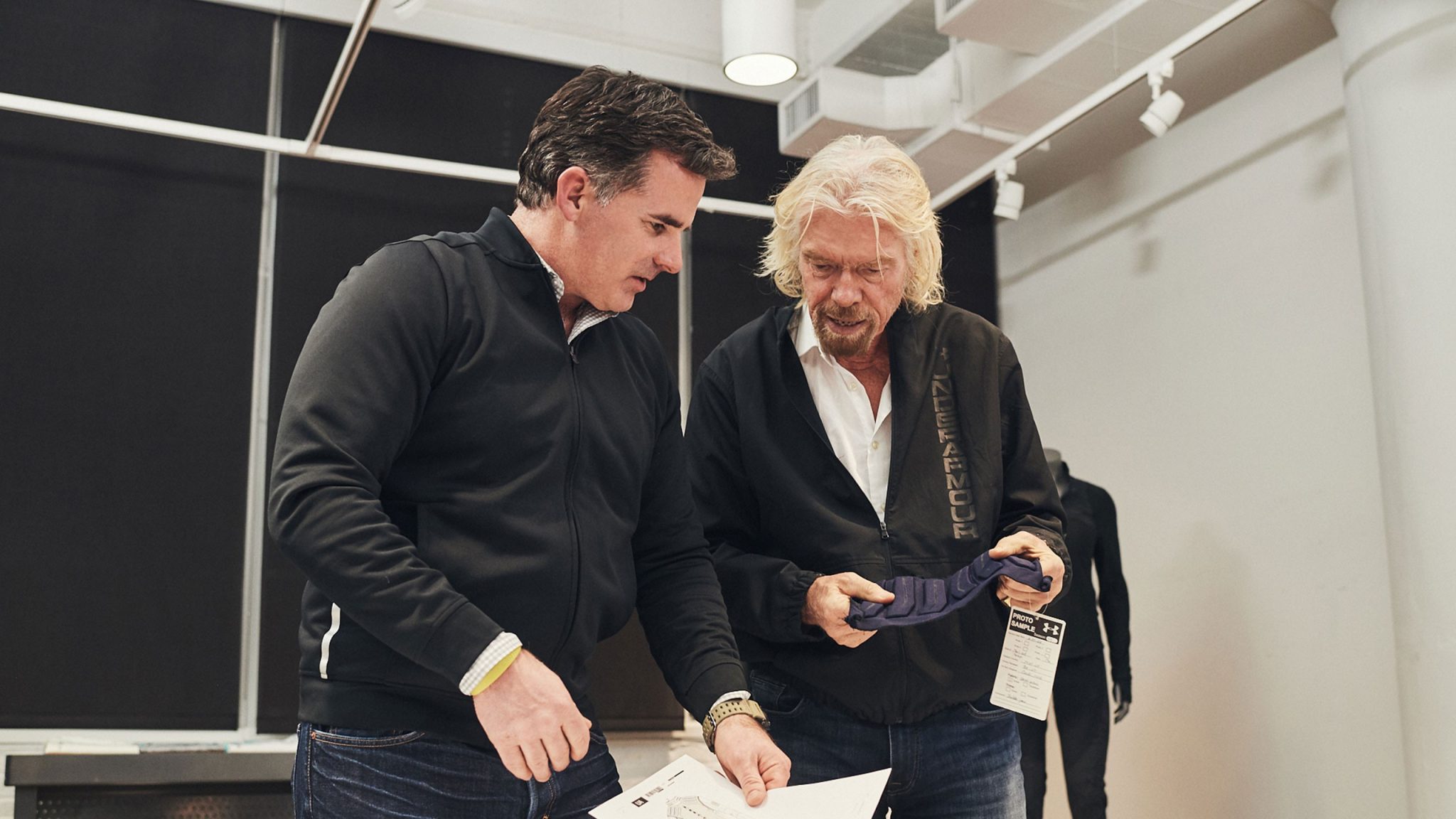 Virgin Galactic is proud to announce Under Armour as its Exclusive Technical Spacewear Partner to create a next generation of spacewear and astronaut performance programs.This exciting and exclusive collaboration brings together Virgin Galactic’s mission to make commercial space travel a reality, with Under Armour’s expertise in technical apparel and footwear,  ensuring that astronaut customers and staff are fully equipped to maximise personal performance in a new age of space exploration.

The US brand, famed for performance through technical innovation, is designing and fabricating space suits for Virgin Galactic passengers and pilots, representing a unique commission that demanded personal performance enhancement through a complex blend of safety, utility, comfort and style.The partnership will also see Under Armour create uniforms for Virgin Galactic’s world-class team at Spaceport America in New Mexico. Whether engineers, astronaut trainers and hosts, or mission control operatives, each member of the Virgin Galactic team will be wearing Under Armour apparel specifically chosen to enhance performance and to provide a tangible sense of shared purpose.

As Under Armour crafts the Virgin Galactic collection, it draws inspiration from its strong heritage of innovative performance solutions for some of the world’s top athletes. Under Armour will mimic the holistic approach it takes with those individuals and in addition to apparel will design programs for astronaut physical preparation and recovery with a focus on enhancing mobility, strength, fitness, nutrition, and sleep.

Flying to space will be a profound experience for Virgin Galactic astronauts. After a thrilling high acceleration, rocket-powered, vertical ascent in SpaceShipTwo at more than three times the speed of sound, passengers will be able to leave their seats and experience the freedom of weightlessness while marvelling at spectacular, life changing views of planet Earth from the black sky of space. The custom-fitted Under Armour spacesuits will inspire confidence through comfort and practicality without compromising the natural desire of every Virgin Galactic astronaut both to feel good and look good during this unparalleled life experience.

The full range of apparel and footwear is set to be revealed later this year, ahead of Richard Branson’s inaugural commercial flight.

Richard Branson and founder of Under Armour, Kevin Plank.

Commenting on the Under Armour partnership, Richard Branson said: “I have followed Under Armour’s progress through a personal friendship with its CEO, Kevin Plank and via the great relationships it has established over the years with various Virgin companies. I’ve loved its determination to push technical boundaries in order to improve performance, so could not have been more pleased when Kevin and his talented teams stepped up to the considerable task of creating a range of space apparel and performance programs for Virgin Galactic. Our partnership is built on the firm foundations of shared values and it will be an absolute privilege to wear an Under Armour astronaut space suit on Virgin Galactic’s inaugural commercial space flight.”Kevin Plank, CEO, Under Armour said, “Working with Sir Richard and Virgin Galactic is an opportunity of a lifetime, one that has the entire Under Armour team across the world excited. This is a great opportunity to test our innovation at the highest level and continue to push the limits of human performance.”For downloadable assets from today’s announcement please visit:Virgin Galactic Press FTP https://www.image.net/virgingalacticUnder Armour Newsroom: https://about.underarmour.com/news/2019/01/under-armour-partners-with-virgin-galactic-2019

Virgin Galactic is the world’s first commercial spaceline. Founded by Sir Richard Branson and owned by the Virgin Group and Mubadala Investment Group, Virgin Galactic will transform access to space for the benefit of life on Earth. To date, over 600 men and women from over 50 countries—greater than the total number of humans who have ever been to space—have reserved places to fly on Virgin Galactic’s reusable space launch system, consisting of carrier aircraft WhiteKnightTwo and spacecraft SpaceShipTwo. SpaceShipTwo and WhiteKnightTwo are manufactured and tested in Mojave, California by its manufacturing partner, The Spaceship Company (TSC). Spaceflight operations will be based at Spaceport America in New Mexico, the world’s first purpose-built commercial spaceport.