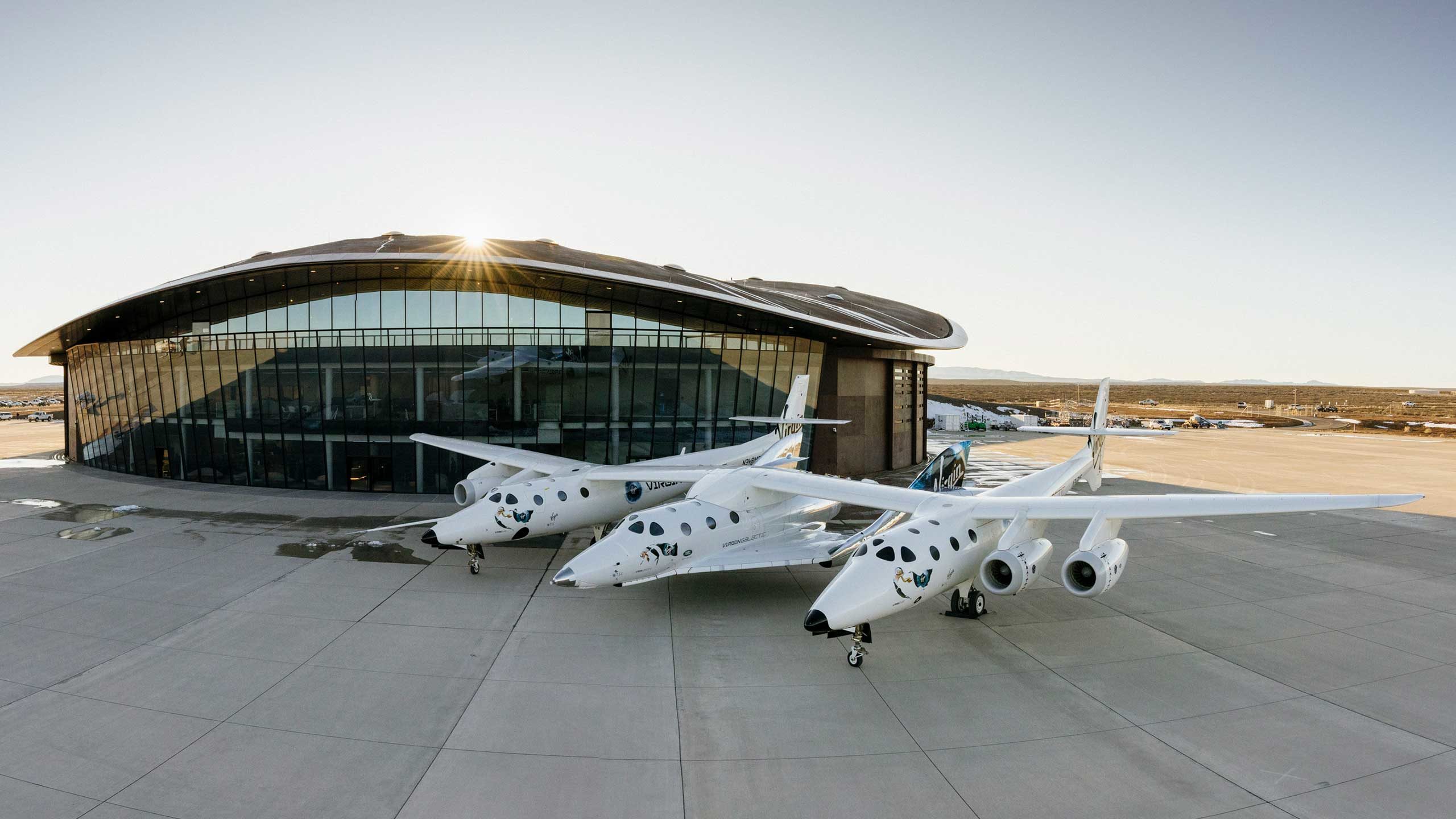 irgin Galactic has successfully completed another vital step on its path to commercial service, relocating SpaceShipTwo, VSS Unity, to its commercial headquarters at Spaceport America’s Gateway to Space building.VSS Unity, attached to the carrier aircraft, VMS Eve, made the journey from Mojave, California, where the Company’s manufacturing facilities are based. The vehicle landed at 15:49MT, where it was greeted by an enthusiastic group of teammates who will operate the spaceship in New Mexico.This captive carry flight provided an opportunity for engineers to evaluate VSS Unity for over three hours at high altitude and cold temperatures, a longer period of time than is experienced during missions to space. These environmental evaluations of system performance are difficult to replicate at ground level, making captive carry missions a vital component of VSS Unity’s flight test plan. 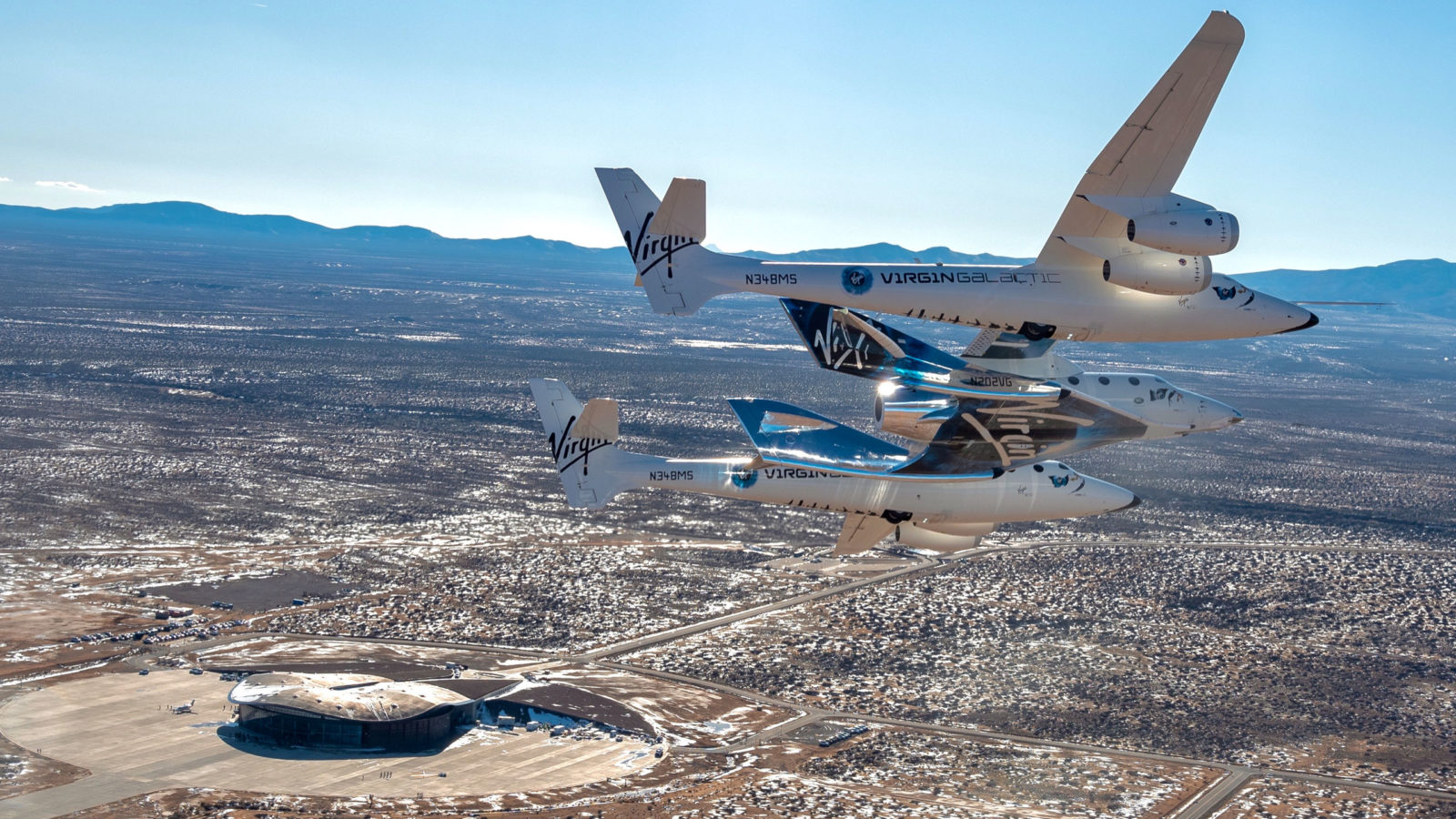 The flight also provided a valuable opportunity to conduct pilot training and familiarization, with veteran Italian Air Force Test Pilot Nicola ‘Stick’ Pecile joining Chief Pilot Dave ‘Mac’ Mackay in the cockpit of the spaceship for the first time. Nicola is the fifth pilot to complete a flight in VSS Unity.  VMS Eve was piloted by Mike ‘Sooch’ Masucci and Frederick ‘CJ’ Sturckow.

The move of the spaceship to Spaceport America marks a key step in the relocation of Virgin Galactic’s to the state of New Mexico.  In May 2019, Virgin Galactic announced that as part of this move, approximately 100 teammates would move to New Mexico from Mojave, California, Spaceport America would become operational and the vehicles would be transferred to the Gateway to Space.  Today, nearly all of those team members have relocated, the spaceport is operationally ready, and both VMS Eve and VSS Unity have now arrived. Of Virgin Galactic’s total current New Mexico work force, more than 70 team members have been hired locally, the result of a conscious effort to attract New Mexico-based talent.“

New Mexico is going to be the world’s launchpad for commercial spaceflight,” New Mexico Gov. Michelle Lujan Grisham said. “Today marks another step closer: We will have a genuine Space Valley in Southern New Mexico, a hotbed of innovation and achievement and space tourism development. I congratulate Virgin Galactic’s workers, George Whitesides and Sir Richard Branson on today’s successful flight – and once again I say to them: Welcome to New Mexico, we’re very glad to have you!”

“When Virgin Galactic started moving to New Mexico last year, everyone felt the sheer magnitude of the task ahead, but we were encouraged and excited by the team’s confidence and strong vision for the future,” said George Whitesides, CEO of Virgin Galactic. “Today we realized the next step in that dream by bringing our beautiful spaceship to New Mexico.  We still have significant work ahead, but we are grateful to all our teammates who have made this day a reality.”

The relocation of VSS Unity to Spaceport America enables the Company to engage in the final stages of its flight test program. This will begin with a number of initial captive carry and glide flights from the new operating base in New Mexico, allowing the spaceflight operations team to familiarize themselves with the airspace and ground control. Once these tests are complete, the team will carry out a number of rocket-powered test flights from Spaceport America to continue the evaluation of VSS Unity’s performance.  During this phase, the final spaceship cabin and customer experience evaluations will also be concluded in preparation for the start of commercial spaceflight operations.

The Spaceship Company, Virgin Galactic’s design, testing and manufacturing arm, remains firmly rooted in Mojave, California.  While VMS Eve and VSS Unity are now based in New Mexico, they will make periodic journeys back to Mojave to support ground and flight tests of new spaceships, as well as for vehicle maintenance and upgrade activities.  There is significant progress being made on the next two spaceships, including achieving the Weight on Wheels milestone for the second spaceship and completing over 50% of the structural and system part fabrication for the third spaceship, which were announced in January.

Dan Hicks, Spaceport America’s Executive Director, congratulated the Virgin Galactic team, saying “This truly is the dawn of a new era for the commercial space sector.  We are tremendously proud of our foundational partner Virgin Galactic – as we see and support their historic progress in making human space flight a reality for our beautiful world.   The New Mexico and Spaceport America leadership will continue our strong support for our visionary Virgin Galactic teammates; and we are looking forward to an exciting 2020!”

Virgin Galactic is a vertically-integrated aerospace company, pioneering human spaceflight for private individuals and researchers, as well as a manufacturer of advanced air and space vehicles. Using its proprietary and reusable technologies and supported by a distinctive, Virgin-branded customer experience, it is developing a spaceflight system designed to offer customers a unique, multi-day, transformative experience. This culminates in a spaceflight that includes views of Earth from space and several minutes of weightlessness that will launch from Spaceport America, New Mexico. Virgin Galactic and The Spaceship Company believe that one of the most exciting and significant opportunities of our time lies in the commercial exploration of space and the development of technology that will change the way we travel across the globe in the future. Together we are opening access to space to change the world for good.