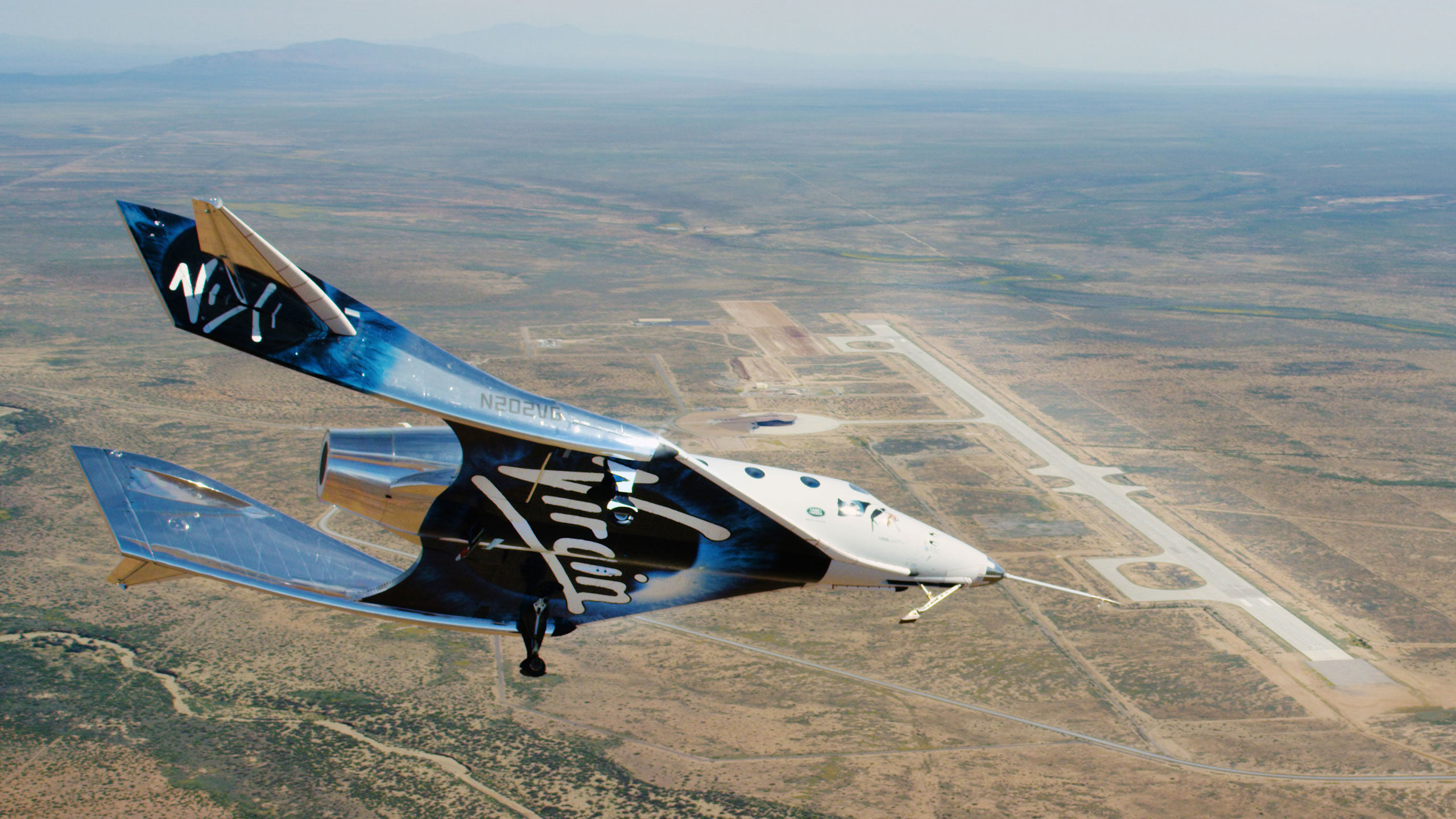 This glide flight marks the inaugural solo flight of VSS Unity in New Mexico and as such is an important flight test milestone in preparation for commercial service.

On SpaceShipTwo’s flight deck were Dave Mackay and CJ Sturckow who, together with the team in Mission Control, executed some of the key elements of a spaceflight profile. These included take-off and landing along with high-altitude release from the mothership, VMS Eve, which was piloted by Michael Masucci and Kelly Latimer.

The flight took off from the Spaceport America runway, with VSS Unity attached to the carrier aircraft, VMS Eve. The vehicles climbed to an altitude of 50,000ft before Unity was released, at which point VSS Unity flew freely for the first time in New Mexico airspace. The spaceship achieved a glide speed of Mach 0.70 and completed multiple test-points, before touching back down smoothly for a runway landing at Spaceport America.

This test flight was conducted under a set of stringent operational protocols to ensure safety against COVID-19. Its successful execution was made possible by a concerted effort to redesign all the operational elements required for safe flight test while meeting new health and wellness protocols. These protocols include changes to the work areas and procedures to enforce social distancing as advised by state guidelines as well as universal mask usage.

This flight milestone represents a major achievement which has been in the planning since SpaceShipTwo relocated to Virgin Galactic’s New Mexico commercial headquarters in February. Virgin Galactic also fully concluded the relocation of its spaceline operations team and their families to New Mexico.

This glide flight provided the first opportunity to test all the components required to fly the carrier aircraft and spaceship in glide configuration, from a new home base and in new airspace. Dave and CJ performed a series of maneuvers with VSS Unity designed to gather data about performance and handling qualities in order to enhance our aerodynamic modeling and verify against similar maneuvers that were performed earlier in Unity’s test flight program. The flight test also provided an opportunity for the pilots and spaceflight operations team to continue familiarization with the new airspace around the Gateway to Space and a chance to capture valuable in-flight data and conduct further pilot training.

Preparation for the next flight will now begin, starting with an in depth analysis of today’s flight data.

George Whitesides, CEO of Virgin Galactic and The Spaceship Company said, “I’d like to congratulate our team for reaching this flight milestone, especially during these challenging times. I am grateful for the commitment displayed by everyone involved, not only in helping to support relief efforts in both New Mexico and California, but also for the dedication and creativity which will allow us to continue safely towards our goal of commercial launch.”

“Today’s VSS Unity flight is another exciting milestone for Virgin Galactic’s progress in New Mexico. We are extremely happy and proud of Virgin Galactic, not only for today’s success but also for the exceptional way they have integrated into NM and supported the region and State during this stressful time dealing with the COVID-19 pandemic. Spaceport America and Virgin Galactic have adhered to new guidelines set by Governor Michelle Lujan Grisham to include social distancing and wearing masks. A big thank you to our foundational partner at Spaceport America!” said Dan Hicks, Executive Director of the New Mexico Spaceport Authority.

Virgin Galactic Holdings, Inc. is a vertically integrated aerospace company, pioneering human spaceflight for private individuals and researchers, as well as a manufacturer of advanced air and space vehicles. Using its proprietary and reusable technologies and supported by a distinctive, Virgin-branded customer experience, it is developing a spaceflight system designed to offer customers a unique, multi-day, transformative experience. This culminates in a spaceflight that includes views of Earth from space and several minutes of weightlessness that will launch from Spaceport America, New Mexico. Virgin Galactic and The Spaceship Company believe that one of the most exciting and significant opportunities of our time lies in the commercial exploration of space and the development of technology that will change the way we travel across the globe in the future. Together we are opening access to space to change the world for good.